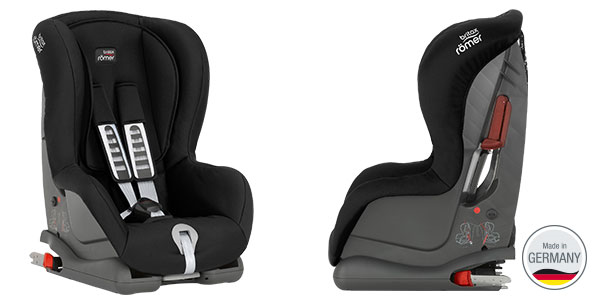 DUO PLUS, the most versatile forward facing chair

ECE R44/04 - Group 1 (9-18 kg)
Safety car seat with ISOFIX homologation according to the R44/04 standards for group 1 (from 9Kg to 18Kg).
It also fulfills the required regulations for the specific approval for Isofix with only two anchor points thanks to the integrated PIVOT-LINK system.


The PIVOT-LINK is a BRITAX RÖMER’s patent that, by means of a lever movement, transforms the forward rotation movement experienced by every ISOFIX seat into a downward translation movement, literally pushing the car seat down towards the car seat.
During this movement, part of the impact energy is transferred to the car seat, thus reducing the load on the child's chest.
This system replaces the third Top Tether anchor point and has been officially approved for more than 250 car models and brands with ISOFIX with only two anchor points.

For cars with three anchor points, it has the Universal Isofix approval.

In vehicles without ISOFIX it can be installed using the car seat belts.